Three days from the end of his probation and a couple of minutes past his curfew, Collin (Daveed Diggs) witnesses a police officer shoot an unarmed black man. That trauma not only irrevocably changes him—it causes him to reexamine his choices and relationships in a way that not even his ordeal with the criminal justice system did, and his journey in the ensuing days is a blisteringly sharp, terrifically moving exploration of race, identity, systemic oppression, gentrification, and friendship.

Blindspotting is very much of the place it’s set in; Oakland lives and breathes as the first main character we’re introduced to, setting the stage for the film’s unsettling, transformative tone. As Collin reckons with who he is and who he wants to be in the future, the city undergoes its own forced transformation, neighborhoods enduring the ruthless onslaught of gentrification before our eyes, one gutted old house at a time. Collin and his best friend Miles (Rafael Casal) are reluctant participants in this process, often hired to move “transplants” (as Miles calls them) into homes that used to belong to people who were “town”, or empty out houses that are about to be extreme-makeovered into submission. Every load they put in their truck is a story in objects about the affluent hipsters moving in and displacing the poorer former residents, mostly of color, who have become ghosts in the places they once lived—and yet the movie never gets maudlin, but zips and flows with humor and rhythm, a testament to the effectiveness of an incredible script written by Diggs and Casal, and the dynamic style of first-time director Carlos López Estrada.

This film is hilarious in its social commentary. There’s Miles’ weirdly compelling fast-talking sales pitches, capitalizing on his ridiculous appropriation of black culture that Collin would violently side-eye in any white man except his childhood best friend, but which has become a running gag between them. Slice-of-life details show the audience how gentrification is wiping out Collin’s crew’s idea of their town with vegan fast food and ten-dollar green juice, or a new Bay Area bro who has a 150-year-old oak stump-cum-coffee table that guests aren’t allowed to put their drinks on. Miles’ oddly emphatic performance of behaviors and speech patterns that are coded as black is funny and awkward and uncomfortable, until it all comes to a head in a long-overdue confrontation between the two best friends.

Blindspotting is also unselfconsciously inclusive in a way that disappointingly few movies set in large, multicultural cities have ever pulled off, and it’s not just a matter of casting diverse actors in parts written for white dudes. Characters’ interactions are clearly informed by their identities in relatable ways without anyone hitting each other over the head with truisms—they talk the way people actually talk to each other, with all the unspoken rapports and tensions that can exist among and between communities, without any nod to the white gaze that’s so often awkwardly inserted to appeal to “mainstream” audiences. It’s a movie that includes white people but doesn’t center their narrative, which I think is a needful experience for Americans of all backgrounds. 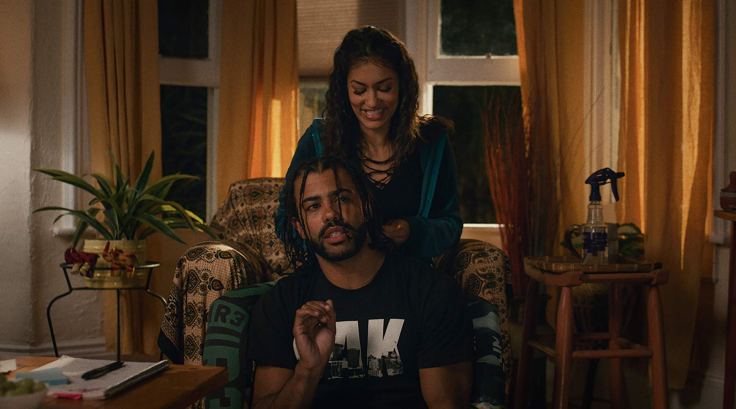 Despite being dense with smartly observed jokes, the film has genuine pathos and sincere engagement with trauma and loss. I’m amazed that this one story tackles so many issues without ever feeling overstuffed or lacking in focus: the ongoing violence inflicted by police brutality; the existential terror of being a black man walking down a dark street with a police car following you; the feeling of being pushed out of newly in-demand spaces that no one cared about when they were your home; the dangerously persistent myth that a gun will keep you safe, disproven so often in such heartbreaking ways. The story smartly connects police violence, the criminalization of black men for existing in public space, and gentrification’s expulsion of people of color in favor of richer, whiter communities, bringing into clear relief the fact that they all have to do with how communities have been historically racialized in relation to the spaces they are or aren’t allowed to own and inhabit. Diggs and Casal understand that these problems are intrinsic to the long-term impacts of the systemic racism that has seeped so deeply into American life that it’s become invisible.

Nor is any of this simple. Collin and Miles and the people who surround them often find themselves protesting gentrification while also benefiting from it; each of them lives with intersecting, overlapping layers of privilege and discrimination that cannot be disentangled. The writers have somehow virtuosically woven all of that into a story with deep emotion and realism, expressing strong messages without once feeling preachy or sentimental. (Props also to Janina Gavankar for pulling off inserting Psych 101 terminology into her character Val’s awkward-exes dynamic with Collin with minimal clunkiness.)

I love all of this, but what I love the most is how Collin moves from speech to rhyme in his most heartfelt moments—when talking isn’t enough to express how he feels about his life as a black man, as a convicted felon living with the disappointment of loved ones, as a man who’s about to crack under the blood and death that has been perpetrated on his people with no repercussions. “Sometimes it feels like rhythm’s all we got in the slums,” Collin muses at a low point. (Interestingly, with Miles, the rap comes out when he’s doing his most successful con jobs, and while it’s hugely entertaining, I don’t think that contrast is a coincidence.)

The movie’s climax features intense, sustained verse that had me spellbound and barely breathing, and which contained so many brilliant lines that I’m dying to go back and soak in properly. Especially poignant is Collin’s observation that the only time anyone listens to black people is when they’re rapping. It’s a sobering indictment of the way black culture gets commodified and appropriated by the mainstream, while their voices and their bodies are ignored, erased, and killed. Blindspotting is certainly impossible to disregard—it grabs you from the first frame and leaves you wishing for more of its poetry.