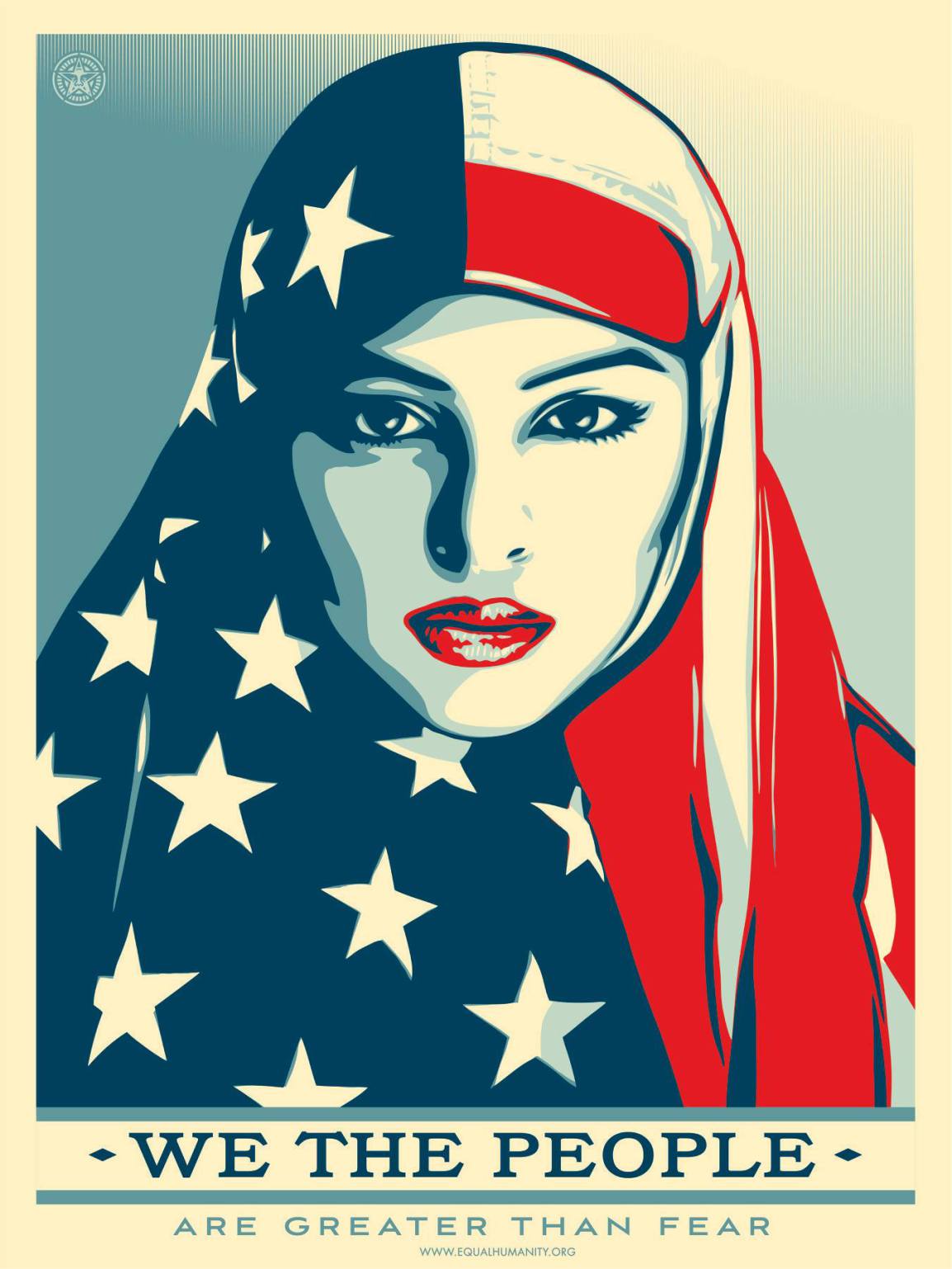 On Saturday, I marched with millions of other women and some men, because I could not stay home and stay silent in such times. Over three million of us marched in the largest protest in United States history, and on every continent, women marched in solidarity with us. Marching isn’t enough, of course, but it is the least we can do; so despite often having doubts about the effectiveness of protests and despite the contentious beginnings of this one, I marched and I am so glad I did. Because as it turns out, this many voices raised in anger and strength and love brought the word to a standstill and made it gasp in awe.

I marched with a hand-drawn version of the by-now famous protest poster by Shepard Fairey, which I quickly copied at the suggestion of a member of the group I was with, since we didn’t have a printed copy. It was a last-minute idea, and I had to frantically finish coloring it as we walked to the square in  downtown Raleigh where everyone was gathering, blotting stray raindrops with a tissue. And yet that quick-drawn poster at the suggestion of a friend had random people smiling at me, shouting encouragement from passing cars, and coming up to me and taking pictures one after another (both with my permission and without).

I hadn’t left the house that morning prepared to be photographed by strangers, but I think the most touching thing I experienced on Saturday was women of all colors bringing their young daughters to me and asking if I would take a picture with them. I wear hijab; in the last fifteen years and especially in recent months I’ve had to get used to seeing children back away from me in uncertainty or fear, simply due to the lies the world has told them about people who look and dress like me.

So for a mother to come up and ask if her six-year-old daughter can take a picture with me, and for that little girl to give me a big smile and unhesitatingly put her arm around me and pose for the camera—that took my breath away a little, in the way the best surprises do. Another woman picked up her toddler and we took a picture together, my poster held high with one arm as I put the other around her, the little girl’s baby fingers clutching my shoulder. I ran across an older couple with multiple copies of the Fairey poster, and we posed together, their family with me and my mom.

After the last eighteen months I’ve come to the point where I don’t know anymore if I can give people the benefit of the doubt when I first meet them; I’m an optimist by nature, but I no longer expect the best from people until they prove me wrong. Part of that cynicism is a product of living life for this long as a woman of color, but some of it is a new, bitter acknowledgement that the world around me is far uglier than I had imagined and hoped for it to be, and it’s no longer hiding its grisliness in dark corners and back alleys. The full force of America’s particular brand of white supremacy has reared its head in so many terrifying ways, and the genie doesn’t seem like it’s going back in the bottle anytime soon.

Since 9/11, like every other Muslim in America, I’ve gotten used to hearing about how unwanted I am in this country, how offensive a certain segment of the population considers my very existence; we’ve gotten used to battling the constant barrage of Islamophobic propaganda that right-wing xenophobes keep shoveling our way like excrement from their bottomless latrines. We’ve had to try to inure ourselves to the unending wave of hate crimes that has grown like a rising tide in recent months, members of our communities being assaulted in the streets and killed in their homes, with minimal news coverage or outrage from the public. For the most part, we weathered this storm alone, because the rest of America either felt we deserved to be treated like lesser human beings, or weren’t really bothered because it wasn’t happening to them.

As demoralizing as these last months and years have been, out of the detritus of the collapse of our nation’s political culture has emerged a new unity that this country has never seen before. People of color have been suffering and dying on this continent since the day the first colonists arrived from on its shores, and yet most of us have been struggling under the psychological yoke of the imperial strategy of “divide and conquer” for almost as long. It saddens me that it took a man depraved and shameless enough to target every single marginalized population in order to motivate us to break free of that mentality and stand up for each other. It angers me that it took the election of a man like Donald Trump to the office of president to make many white people realize that we have a race problem in this country, and that they might be complicit. And even now, there is so much work to be done before we are all on the same page (if that’s even possible), so many voices that have yet to be heard and championed. Yet despite all this, it heartens me to know that we’re at least trying to hear each other now, because it’s our only way forward.

I don’t need other people of color to stand up for me in order to have the courage to keep fighting; I don’t need white people to acknowledge my humanity in order to feel human. I know that I have the dignity and the rights that God gave me as a human being, and the denial of those things by His creation doesn’t erase them in the eyes of the Creator, or in mine. I am here on this earth to fight for justice, kindness, and freedom for every soul, until my dying breath, because those are the things that reflect the divine revelation in a person’s character; and my religion teaches me that a believer is one who makes the world around her a better place than it was when she found it.

But if we are to win this fight, we must fight together. There aren’t enough of us to defeat these cancerous growths in our society on our own. Muslims alone are only eight million; people of color only represent about forty percent of the nation. As with discrimination against any marginalized group, neither racism nor Islamophobia can be defeated by the victimized groups alone—there can only be a change if the majority decides to be better, to reject the stereotypes and propaganda that permeate society and to dismantle the institutions that promote and maintain white supremacy in this country. Until we all stop buying into the hierarchy of racial worthiness that has been woven so tightly into the fabric of our civilization, we will never be able to rip it out of this country’s DNA and replace it with a true equality that exists not just in name but in reality—in our institutions and our culture, in text and in subtext.

There’s so much work still to be done, and every day of this new administration feels worse than the one before, like we’re trying to walk upstairs on a down escalator greased with lard. And yet I am so touched by the other stories I’ve heard in the last few months—not those about hatred and violence and prejudice, but about hands held out in solidarity and kindness, from those who have recognized that their humanity is at stake if they do not step up for others now.

Because that’s the beauty of truly understanding what it means to be a community. It’s the realization that we fight for others not because we are better than them, or because we feel pity for them, but because we cannot claim to be decent people otherwise. The moral obligation we have to our own souls is not to let injustice go when it appears in front of us, but to own our responsibility for each other’s oppression, and take on the duty to eradicate it. Not only will it begin to heal the wounds of so many years of fighting our battles alone and sometimes even in competition with each other, it’s the only way we will ever truly overturn and defeat white supremacy, and take back this country for all of its citizens. The Women’s March was the first rallying call of what I hope will be an epic battle, and one I believe it is possible to win.